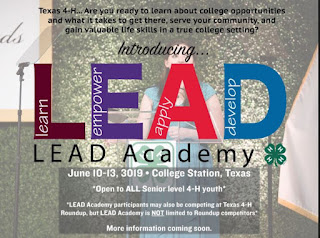 The Texas 4-H Youth Development Program is excited to announce a new opportunity for our High School age 4-H members. This year, June 10-13 in College Station, we will be offering LEAD Academy. Attendees will have an opportunity to learn about college opportunities and what it takes to get there, serve their community, and gain valuable life skills in a true college setting. Our goal of this activity will be to provide the opportunity for young people to connect, learn, engage, lead and impact their communities, their country and their world. The event will be designed to engage youth in hands-on educational activities in which they explore, practice and master existing and newly developed skills/knowledge in civic engagement, civic education and personal development. The objective is to provide youth a broad- based learning experience in which they will acquire practical knowledge and skills to reinforce the attitudes and motivation that will give them a heightened sense of responsibility and capacity to connect as active members of their communities, nation and world. From this experience, we hope the youth attending will apply what was learned in their real world experiences in which they develop leadership skills using their voices, work, ideas and/or behavior to make a difference in their community, country and world.

LEAD Academy participants may also be competing at Texas 4-H Roundup, but LEAD Academy is NOT limited to Roundup competitors.

If you did not have the opportunity to qualify through district competition for the State 4-H Roundup well hold the horses!!! There is SSOO much more to do at the Texas 4-H Roundup.  Take a LOOK!!
Invitational Contests!!!!
The following contests do not require individuals to qualify at district level contests. Contests are open to all 4-H members who are in the 6th – 12th grades as of the September 1, 2018 school year. (That’s Intermediates AND Seniors!!)
INVITATIONAL CONTESTS
• Agriculture Product Identification
• Archery
• Discover Scientific Method Research Poster
• Entomology Identification
• Healthy Lifestyles
• Hippology
• Invitational Livestock Judging
• Invitational Meat Judging and Identification
• Livestock Skill-a-thon
• Photography Judging
• Poultry Judging
• Soil Judging
• Swine Quiz Bowl
• Robotics Challenge
• Vet Science Skill-a-thon
• Wildlife Challenge

Some of the contests allow Intermediates to move up to the senior division. Intermediate Age youth can compete as a Senior to complete a team for SOME Invitational Contests. Those choosing to do so, will be eligible for awards in that level only. Intermediates moving up would be considered as Seniors for ranking. This will NOT be allowed for the following contests: Hippology, Healthy Lifestyles, Livestock Skill-A-Thon, Poultry Judging, and Soil Judging as these contests allow for national competition open to Seniors aged youth only.

The State Fair Breeding Gilt is NEW this year.

Region 4-H Horse Show – June 18-19
New Place and New Dates!!!  This year the Region 4-H Horse will be held on June 18-19 at the Texas Rose Horse Park in Tyler Texas!!  Don’t forget to get Horse Projects validated on 4H Connect to be able to participate.

Please note – registration is due to your county Extension office.  And camp registration packet can be found on your Family 4H Connect page.
Again, youth will need to be signed out by an adult – parent, volunteer or county agent - - - we don’t want anyone to get left at camp or wonder where & who they left with.  ALL campers MUST to be picked up by 10 am – parents are invited to come to the closing & awards presentation.

TO BE TURNED IN TO YOUR COUNTY EXTENSION OFFICE BY Friday, May 31st.

Forms:  (All Of These Forms Are Required) – to be turned in with fees 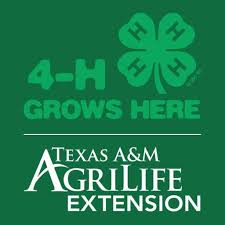 Meets the 3rd Tuesday of Each Month at the County Extension Office - 6:30 pm.